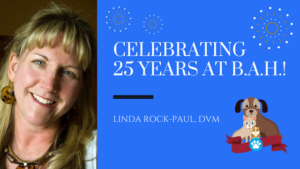 In 1992, a brand spanking new veterinarian began her career at our practice. It was a busy year for Linda Rock: she graduated from Kansas State University’s College of Veterinary Medicine on May 15th, married her college sweetheart, Vic Paul, on May 23rd, and started working at Bellevue Animal Hospital on June 1st. An Omaha native, Linda graduated from Central High School in 1984, and attended the University of Nebraska-Lincoln, earning her Bachelor of Science degree in animal science in 1988. Her special interests now include Exotic Medicine and Soft Tissue Surgery.

Dr. Rock-Paul has, of course, been an animal lover since childhood.  As the daughter of a nurse, she also developed an interest in science and medicine early in life. She chose a career in veterinary medicine because she loved helping out on her grandparents’ farm when she was growing up. She spent a lot of time helping with the cows, pigs, horses, sheep, and chickens, but her favorite time was spring: that’s when the kittens were born! Linda remembers, “I would go to the hay loft and ‘rescue’ them and put them in a box with doll blankets. While we were eating lunch, the mother cats would take them all back up one at at time!”

Fun fact: Dr. Rock-Paul said that if she were an animal, she’d choose to be  a cat – probably something like a serval or a cheetah – but she can’t run that fast!

In 2003, Dr. Rock-Paul entered into a joint partnership with colleagues Dr. Karen Campbell, Dr. Tammy Pfeiffer, and Dr. Aaron Truax, and purchased our hospital from its founder, Dr. James E. Boyd. (Dr. Campbell retired in December 2016, so the partnership is now a trio.) Dr. Rock-Paul has served as our Support Staff Director for many years, manages the hospital inventory and doctors’ schedules, and she is a member of the AVMA and AAHA. She is also past president of the Nebraska Academy of Veterinary Medicine (NAVM.)

Over these past 25 years, Dr. Rock-Paul has been a great asset to us in continually fulfilling our mission of offering the highest-quality veterinary care in a warm, caring environment.  She has treated thousands of canine & feline patients, as well as numerous “exotic” patients such as birds, ferrets, bunnies, lizards, and other little critters. She has represented us and her profession at many Career Day events; mentored veterinary students and new staff members, not to mention Girl Scouts; and raised two children of her own (who are now fine young adults!)

In addition to her husband and children, Dr. Rock-Paul’s family currently includes two Puggles named Rocky & Moose; a rescued Boxer named Bella; two cats named Isabella (Izzy) and Kim Possible; a “grand-cat” named Louie; two rabbits named Charlie and Chief; and three Sulcata tortoises named Scooter, Twilight, and Emmit. When she’s not working, Linda enjoys spending time at the gym, attending baseball games or movies with her family, traveling across the United States and around the world, and running here, there, and everywhere with her kids. (We’re pretty sure she’s Wonder Woman in disguise, but we can’t get her to confess!)

On this momentous occasion, we’d like to extend our thanks to Dr. Rock-Paul for all her years of service to our team and our clients, and let her know that we look forward to working with her for many years to come. In the words of our friends and long-time clients, Janis & Doug Wanke:

Congratulations on your 25th anniversary!! We truly found a wonderful vet 🐶 when we found you!!!