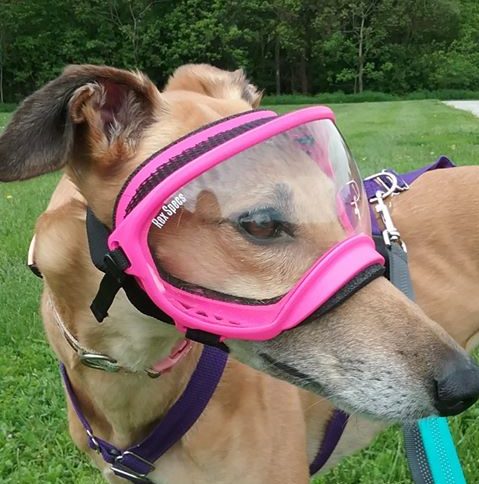 Glory Wells is a six-year-old, spayed female Greyhound who has been sporting some glorious goggles during the past year. In early 2019, Glory was diagnosed with an eye condition called pannus. (She also dislocated a toe this year, hurt her shoulder, and developed a skin irritation on her face which caused large bald spots – but those are stories for another day!) Glory came to see us for a routine exam, heartworm blood test, and a vaccination for leptospirosis on March 1, 2019. During the exam, Kathryn L. Maltry, DVM, noticed unusual pigmentation in both of Glory’s eyes, and multiple dots or tiny holes (these are called punctate lesions) in both corneas. Dr. Maltry suspected pannus, and discussed this with Glory’s owner. We referred Glory to an eye specialist in Omaha, where she was seen on April 3, 2019. The diagnosis of pannus was confirmed.

We asked Dr. Maltry to describe the eye condition:

Chronic superficial keratitis (CSK) or pannus is an inflammatory condition of the canine cornea. It is immune-mediated, meaning that the body’s defenses are inappropriately attacking its own tissues. CSK most commonly starts as a red lesion at the temporal limbus or outer edge of the cornea. As the disease progresses, inflammation and blood vessels extend centrally. Melanosis, or dark pigmentation, is often seen in conjunction with this inflammation. If untreated, this pigment can cover the cornea and affect the dog’s ability to see.

What Dogs are Affected?

German Shepherds and Greyhounds are some of the most commonly affected dog breeds, though it can occur in any dog. Genetics and exposure to UV light may play a role in the development of this disease. Age of onset is important in the prognosis, or the likely course and severity of the condition. Dogs that are affected at 1 to 2 years or age typically have more severe disease, while those affected at a later age have less severe disease. Dogs that live at a higher elevation or have more sun exposure also tend to have more severe disease that is, unfortunately, less responsive to treatment.

What Can Be Done About Pannus?

Though CSK cannot be cured, it can be managed! The pet’s treatment is lifelong, and usually consists of topical steroids or topical application of immunosuppressive drugs such as cyclosporine. These medications help to reduce inflammation, as well as the cloudiness and redness that come along with that inflammation. Reducing exposure to UV light can also be helpful in control of CSK; this can be achieved by keeping the pet inside during the sunniest parts of the day or through special dog sunglasses such as Doggles or RexSpecs. In cases where the pigment has completely covered the cornea, surgery may be indicated to remove it to restore vision.

As we come to the end of the year, her owner shared with us that “Glory is in good health, and her incurable, but manageable eye condition has improved greatly, with no vision loss, thanks to Bellevue Animal Hospital and her eye specialist at VESN (Veterinary Eye Specialists of Nebraska.)” 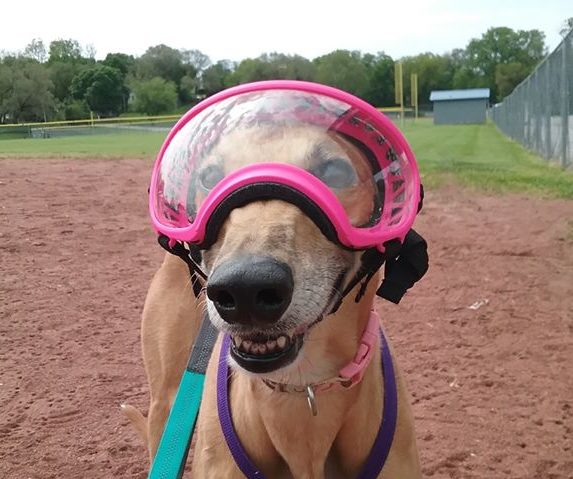 Clearly, the future for Glory is so bright that she’s gotta wear shades!

Accessibility by WAH
Call Us Text Us