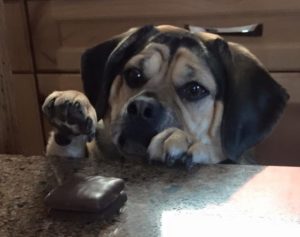 March is Pet Poison Prevention Awareness Month, and Poison Prevention Week is March 19th – 25th.  Each year, veterinarians at the Pet Poison Helpline review their prior year’s case records to identify specific toxins that have generated the most inquiries from pet owners and veterinarians. Some of the toxins are species-specific (such as lilies in cats and xylitol in dogs,) while others, such as chocolate, affect multiple species.  Some toxin exposures are more commonly seen in certain areas of the country; marijuana, for example, is increasingly sending pets to animal hospitals in Colorado. A study by a Denver emergency-room group and Colorado State University, published in 2012, found a fourfold increase in their marijuana toxicity cases from 2005 to late 2010; it is expected that the number of poisoned dogs and cats will increase further now that marijuana has been legalized in the state. In South Carolina, the top call to Animal Poison Control is due to pets eating Sago Palm: an everyday plant that grows in homes across America, and a longtime fixture in backyards in the southern U.S. Even taking one small bite of the Sago Palm plant is enough to kill a dog, or a child.

We asked our veterinarians and medical support staff what pet poisons send the most callers to our phones and patients to our hospital, and their answers are comparable to the “Top 10” toxins reported in recent years across the United States. In no particular order, they are:

One of our young canine patients came to see us for a follow-up appointment just this month after a visit to the animal emergency clinic. This little guy had eaten an unknown quantity of 220 mg Naproxen tablets; the amount he actually ingested was probably minimal, but for a dog his size, even one tablet would have been enough to cause kidney failure! Thankfully, this pup received prompt veterinary care and is doing just fine now.

What to do if your pet gets poisoned:

If your pet has eaten something toxic, call us immediately at 402-291-1255; after hours, contact the animal poison control center or an animal emergency clinic. If you’re not sure if your pet ate the item in question, call anyway! Better safe than sorry!

For more information about pet poisons and how to keep your pets safe, you can download this fact sheet:  Handout on common household poisons

Font Resize
Contrast
Accessibility by WAH
Call Us Text Us